This page is sponsored and paid for by Vintage Hammond Church Organs of Houston, TX & Atlanta, GA 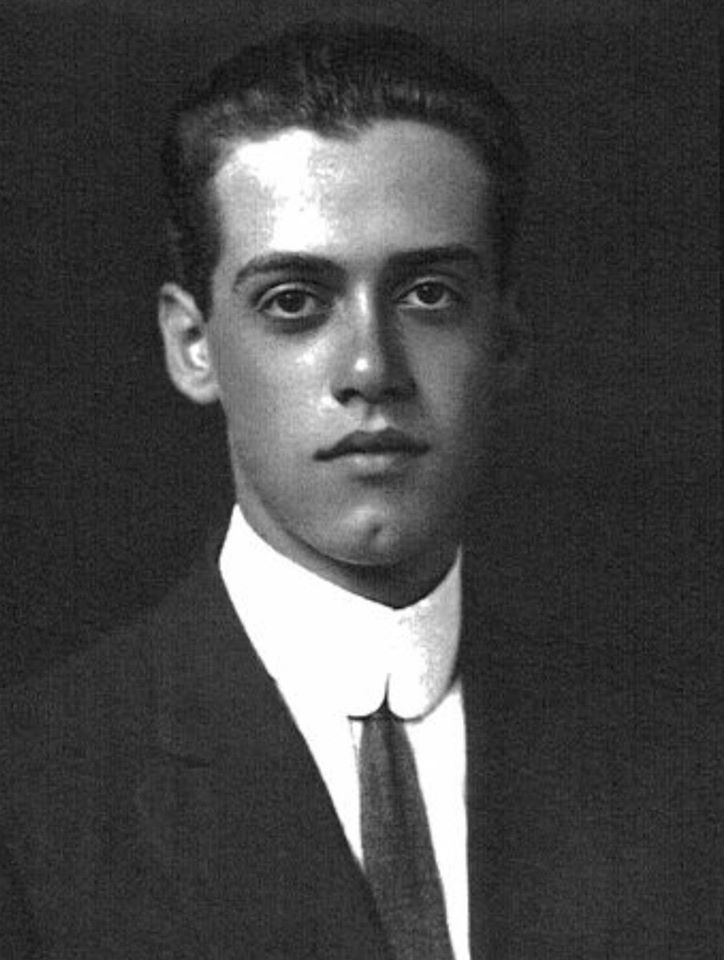 Laurens Hammond in his 20's
Chapter III. Larry's Father and the Evanston Home

illiam Andrew Hammond, Larry's father, never had more than a grade school education before he went to work as a Western Union messenger boy.

Many messages took him to the First National Bank of Illinois, and before long he was stationed at the Bank permanently because he had gotten to know everyone there. With that start, he captured the Bank, ultimately became the head of it. He shone with people, never forgot a name or a face, and had enormous number of friends.

It is said that he was ambidextrous and could write a letter with either hand while he dictated a third! He was a tremendously successful banker, but a bit bull-headed. For example, the Bank had just put in a new sprinkler system. He was taking a friend around. He pointed to the new gadget. "Ten to one it won't work", he asserted hitting it with his walking stick. It just about drowned him, and he had to telephone home for another suit of clothes to be sent the twelve miles by horse and buggy.

dea and Larry's father were married in 1883, and proceeded to have their three daughters. William rose rapidly in the Bank, and when he and Idea got up in the world...

they built this beautiful big house in Evanston, just one house away from Lake Michigan. This was in 1893, two years before I was born. My mother had a French governess, because at that time it was considered stylish to have French people. And after dinner it was customary for the governess to come down and show the current baby in a long dress that was cut off to fit the current governess's height - so that when she held the baby, the dress almost reached the ground.

My father and mother decided on the social aspect of having all the people in to dinner, that they should have a butler; and they engaged - I don't know where they got him from - a butler who was a very fine-looking man, and he came in and he supposed to stand and introduce everybody to everybody else. But in Evanston, Illinois, people were not accustomed to butlers, and so everybody shook hands with the butler, and wanted to know all about him and who he was, so that the whole butler deal sort of fell through.

My father's father was a minister. In my family it goes way back - any number of people were Episcopal ministers. My father brought his father and his fourth wife (three had died in childbirth) to his house in Evanston, and installed them in a place where they had an elevator to take them to a higher floor. It had no power, just a big rope, and gears and counter-balance, and you could get yourself up and down with little effort. At that time there wasn't electricity in the house - there was gas. There were fixtures, anticipating electricity, and when it was finally turned on, they had an open house, and the power company sent a man for the evening in case of trouble!

y father's father had been a man who under no circumstances could play cards himself, and had always said that card playing was a thing you could not do on Sunday. But as he became older, he finally decided that playing cards was not a work of the Devil, and he personally got to enjoy playing bridge-whist very much, so it finally arrived that they started playing cards certain evenings, and actually they were playing cards on Sunday evening, when a terrible thing happened; he fell over backwards and hit his head on the fender and died instantly; and that was an awful thing - - he died playing cards on Sunday! And after he died and was beautifully buried, his widow took her room on the top floor and one morning five months later she quietly died in bed.

At the Evanston house my father and mother had many servants: a coachman, horses, and everything you could think of. And they decided to build a smoking room, and this smoking room was made in a copy of some kind of Turkish arrangement, which was all the fashion at that time. They had Turkish furniture and they had glass tubes of different colors hanging from the ceiling, and each tube had a wick with a light. It was absolutely the most Turkish thing you could think of, and after dinner the gentlemen would go to the Turkish room and smoke cigar.

uch was the home, its comfort, affluence and style, into which Larry was born. How different his own life would have been if this kind of environment had continued, is an interesting question.

©Copyright 1974, Stuyvesant Barry All Rights Reserved May not be copied, published, used on anyone else's web pages or in any way without express written permission.